Sometimes, even when you don’t set out to have a theme for a room makeover, one pops up on the horizon anyway. Such was the case when Shasta and her husband of www.faithfullyfree.com decided to paint their daughters’ (Anna and Lexi) shared bedroom and ended up with …a Little Mermaid themed bedroom.

The girls’ room had an odd shape, situated as it was up near the eaves of the house. The ceiling was double cantilevered with a narrow top bit and sloping sides descending at an angle to meet up with the walls in an inverted “U” shape. The color scheme was a flat neutral pale beige, the ceiling a bright white. Shasta wasn’t even sure the room had ever been painted prior to their moving in. 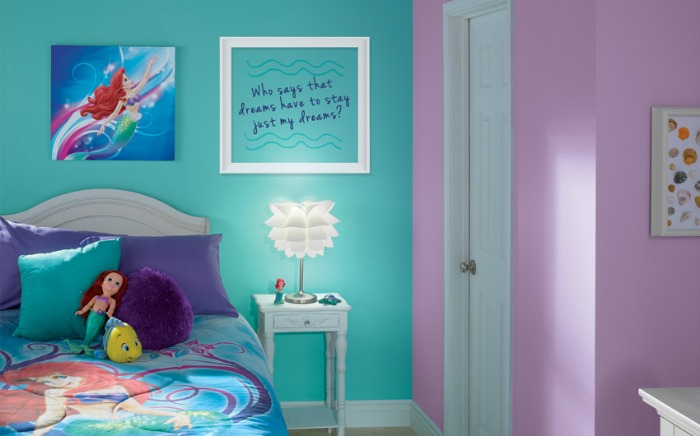 Of course, as is prudent for any parents, Shasta and her husband consulted with their offspring about favorite colors, which, the girls being of elementary school age, had a tendency to change and evolve. For years purple and pink had been the odds-on favorites for both, but when asked, their daughters expressed a preference for teal and purple over the previous color combination. 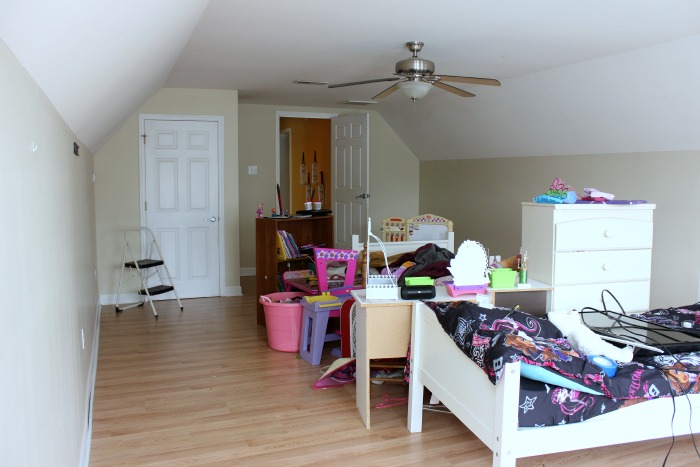 In that moment, the Little Mermaid, the famous Disney animated movie, which had employed much the same color palette, suggested herself as the theme for the room!

Secretly, Shasta herself was a HUGE Little Mermaid movie fan. She had grown up with the film being her favorite, knew all the songs by heart. Her daughters, she now surmises, seem to have inherited her love for the tale along with half her DNA!

Fortunately for Shasta and the girls, there is no lack of tie in products and merchandising for this Disney classic! Shasta and hubby were even able to find the exact shades of paint the girls wanted for their bedroom makeover, licensed by Disney and manufactured by Glidden. Bearing the Disney imprimatur, the colors chosen were:

As hinted at above, it turns out that the girls’ infatuation with the color pink had not completely faded—they demanded that the walls at the two ends of the room be painted in that shade, and wanted and similarly colored chalkboard on one of the bedroom walls.

Shasta and her husband painted the vertical walls on either side of the room, Cool Marine, an almost turquoise shade of teal. The “Enchanted Violet” was added to the sloping planes of the ceiling, at first as an experiment to see how the two colors looked together. Counting the combination a success, they forged forward.

The upper portion of the ceiling remained white, which helps to facilitate the natural light in the room and its fixtures.

The end walls were quickly painted in Blushing Princess.

Next came the chalkboard, and Shasta provides some lovely visual evidence of how that portion of the project was accomplished, and shares information and links for sources of Little Mermaid bedding and accessories to flesh out the theme. The addition of prints of Mermaid Ariel and other Disney Princesses completed the look

For before and after, in process photographs and a highly entertaining narrative describing how the room makeover took shape and progressed, check out Shasta’s blog at: 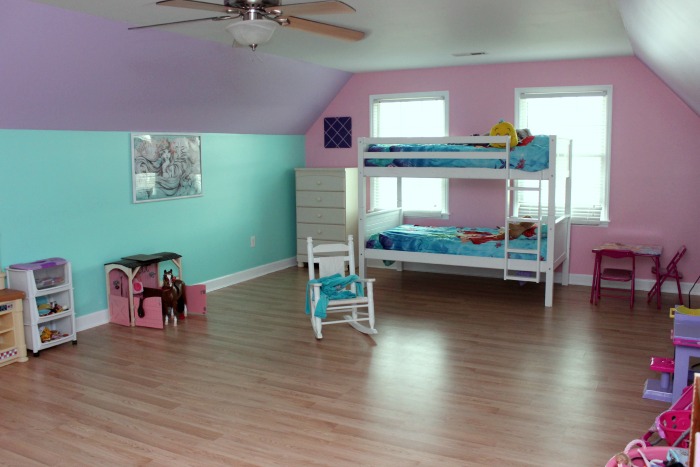