This is the first home we bought together on the edge of a good district in northern London, a year after we were wed… an unexpectedly spacious three-bedroom apartment arranged on the top three levels of a typical five-storey Victorian townhouse. The major selling point, apart from the space, was the amazing view across the city from the uppermost converted loft level. We were young and in love and didn’t really care about the endless stairs! 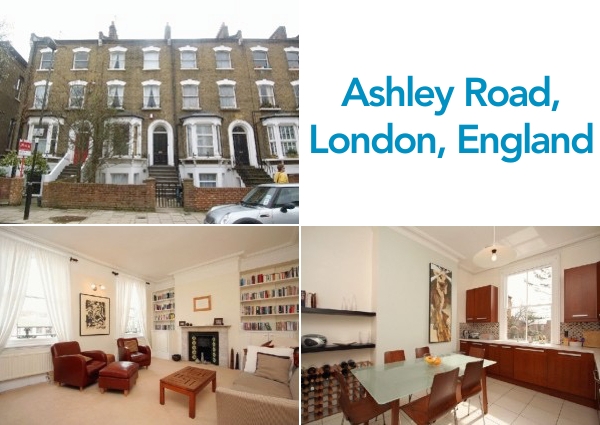 Most of the rooms in the apartment were pretty much blank canvases, with standard issue Magnolia painted walls, cream wall-to-wall carpeting throughout, and pretty original character features such as the fireplaces and the sash windows.

However, the kitchen was a major project. A previous owner – apparently a giant – had hand-built a fairly decent but completely oversized kitchen: we both had to stand on steps to reach the wall cupboards, and I actually couldn’t reach anything placed in the inner corner of the countertops! Plus the whole thing was built round the world’s oldest and creepiest gas-powered hot water boiler…

Within weeks of moving in we set about remodeling the kitchen: whilst we are fairly handy with average DIY challenges (we’re excellent at wallpapering, it turns out), we were certainly not up to the task of relocating the new, modern hot water boiler to an upstairs airing cupboard. Plus the age of the property, with its flaking walls and wooden sub-floor, put us off tackling the kitchen installation ourselves.

So we found a reliable local contractor, went to a swish kitchen showroom and designed our dream kitchen, then spent several weeks sourcing cheaper versions of all the items in the dream version (thank you Internet and IKEA!) After a couple of months our living room was filled with all the sparkling new materials/tiles/cabinet units/ new sink/ faucets/ appliances etc and we simply watched in awe as our contractor’s team transformed the place in just ten impressively productive days! 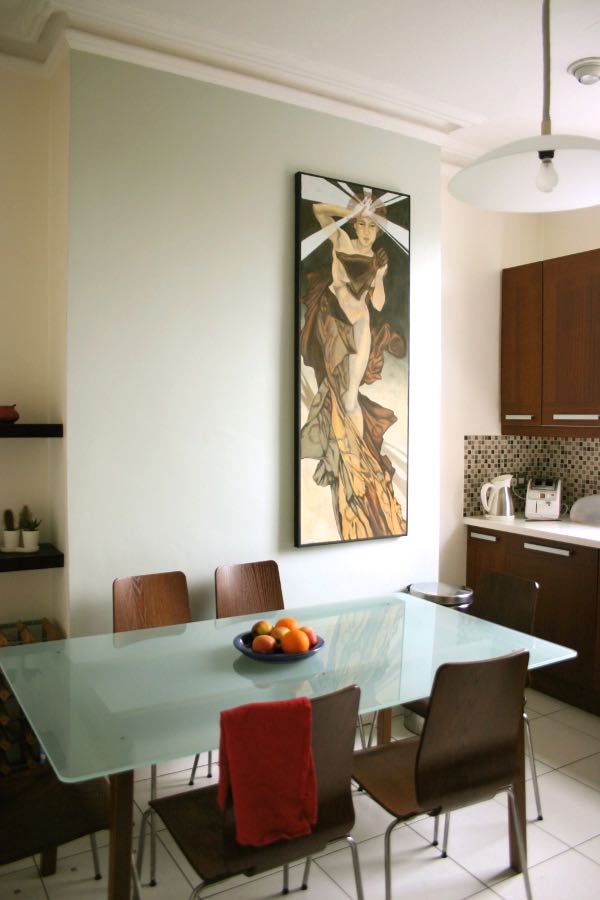 After the team left, we had a crazy weekend repainting the walls a crisp white, choosing to highlight the now filled-in defunct chimney surround a soft aqua to match the glass table top (Farrow & Ball’s Pale Powder). The painting is a reproduction of Morning Star by Alphonse Mucha that I did during my art college years, and provided the color inspiration for the whole kitchen. 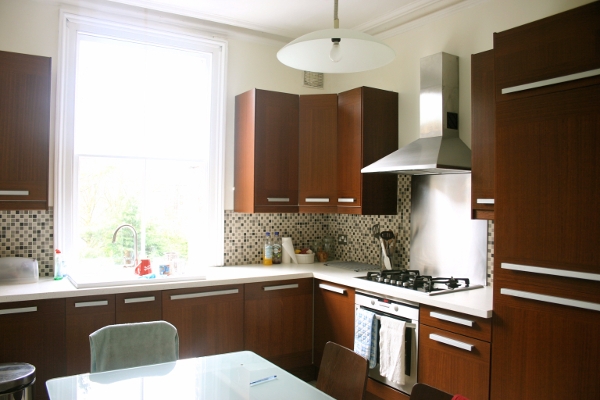 We had so much fun designing this kitchen!  One of the best parts for me was to have all integrated appliances, creating a seamless flow of kitchen units: that tall unit to the right of the oven is the fridge-freezer, and to the left of the sink underneath are the dishwasher and the washing machine (sadly no space in this house for a separate laundry room.) I also love the countertop which was a kind of acrylic based quartz-like laminate.  You can’t see the detail, but the seam between the two sections is completely invisible!

With most of our “home making” budget pretty much used up for the kitchen, it was lucky that the rest of the house only needed a few splashes of budget-friendly personality. In the master bedroom we painted an accent wall in Farrow & Ball’s Biscuit, to provide warmth and tie together the mismatched wooden furniture and another painting I never actually finished; and in the second bedroom we learnt all about the joys of wallpapering, hanging a bold gold and black floral pattern for a bit of drama. And I went to Walthamstow market, bought an entire roll of fabric and made simple curtains for the whole house! 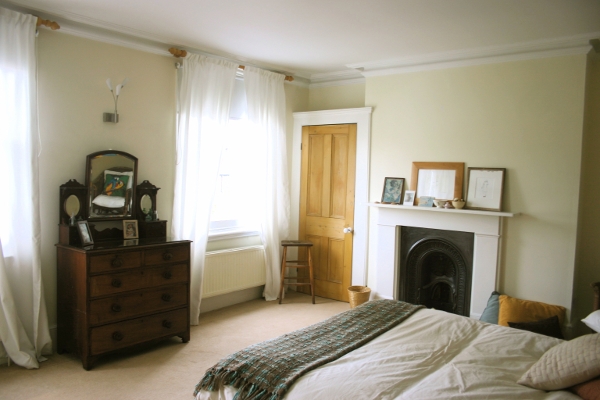 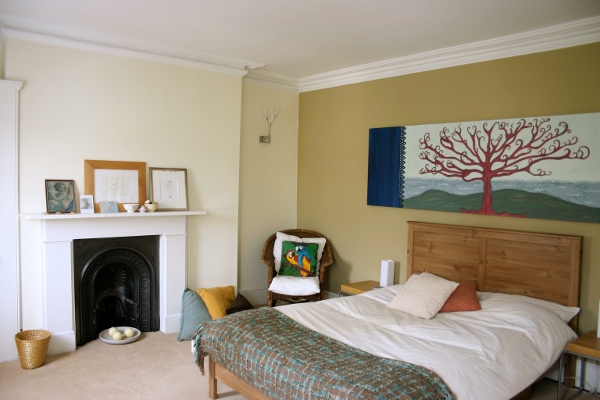 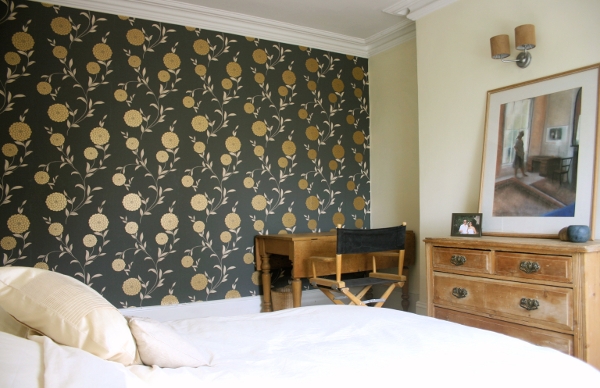 Finally, the mini roof terrace was in need of major TLC. We painted the peeling railing a smart white, had the bitumen surfacing repaired and then protected with blue-gray-tan toned cement paving slabs and natural pebbles along the drain channel, added a few pretty potted plants and enjoyed several fine months of living in our first home. 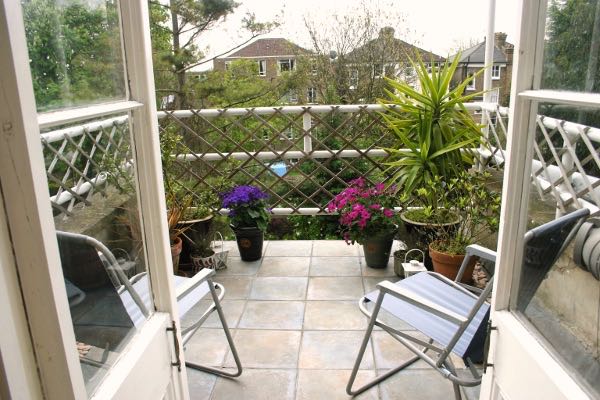 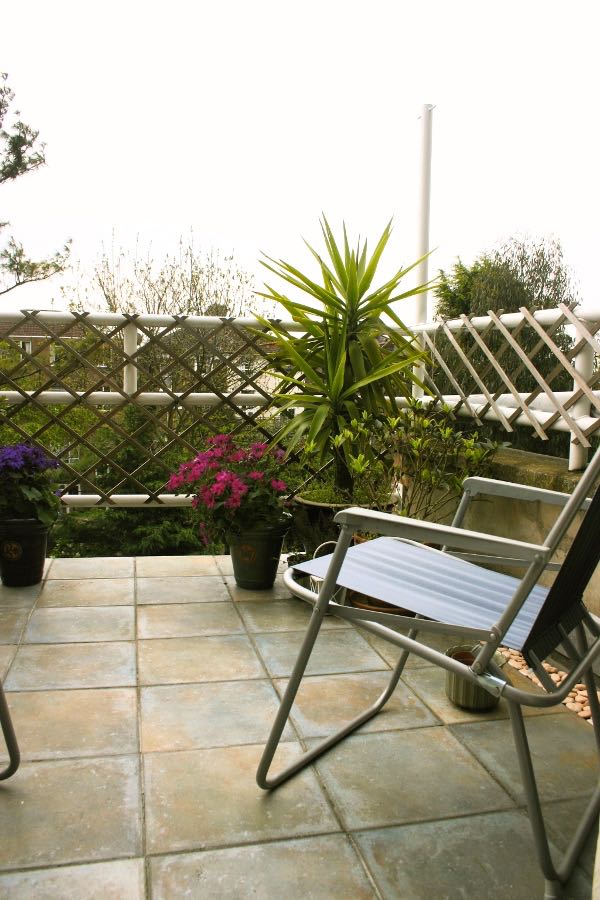 Some two years later we moved to the south of France!