In 2006 we moved from the big, crazy hustle and bustle of London to the quiet calm of a small village in the foothills of the Pyrenees in the South of France! Due to various circumstances we rented three different houses, until 2009 when we found a home that we wanted to buy. 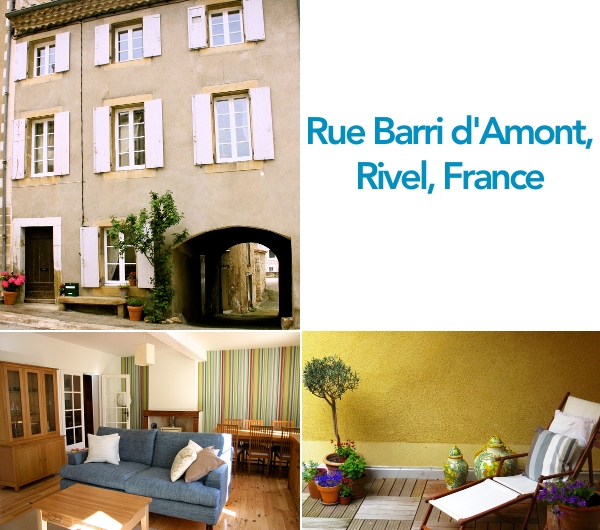 Unlike many of the old houses in these parts, the house in Rivel had been recently modernized – not entirely to our taste – but with assets like double glazed windows, which made all the difference in the winter since we were only 40 minutes from the nearest ski station! And enough original features that had been preserved to give us the kind of character property we love most – just look at this ancient door! 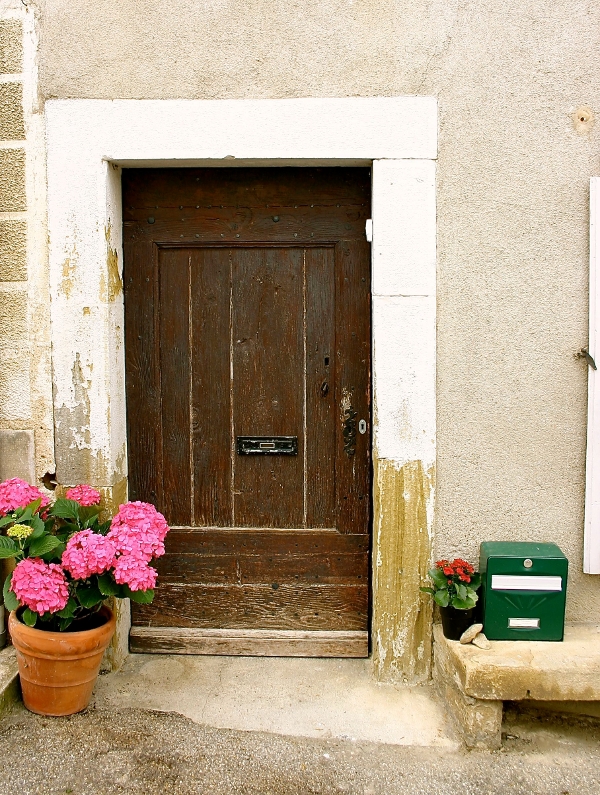 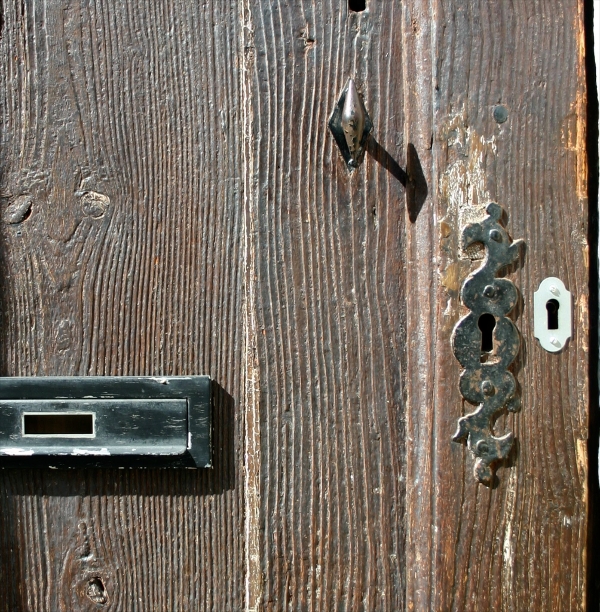 The property actually combined a main two-bedroom house and a converted barn at back, which was presented as a further two bedrooms, but had the potential to be a workspace, or separate holiday accommodation to boost our income… Plus not being naturally green-fingered, we also loved that there was a spacious roof terrace above the converted barn, big enough to fill with lots of lovely, easy-care potted plants! It all looked like it would be pretty easy to adapt to our needs.

However, this house was to prove to be much more of a project than we had bargained for. Much of the previous renovations were extremely shoddy and superficial, meaning we had to go back to the drawing board a few times to fix certain areas. We first realized this a week or so after we moved in when during a little house-warming party the entire electric circuit blew, with a proper bang and smoke and everything! (The party continued in candlelight and the next day we organized an electrician to come rewire the board.)

As with our London house, the first major remodel was the kitchen. The previous owners had used the property exclusively as a holiday home, so the kitchen was basic and not in any way practical for everyday cooking. In fact they had installed the cooker under the ages old former chimney hood, leaving too small a gap between the hob and the hood, which meant that you couldn’t reach the back rings of the hob! 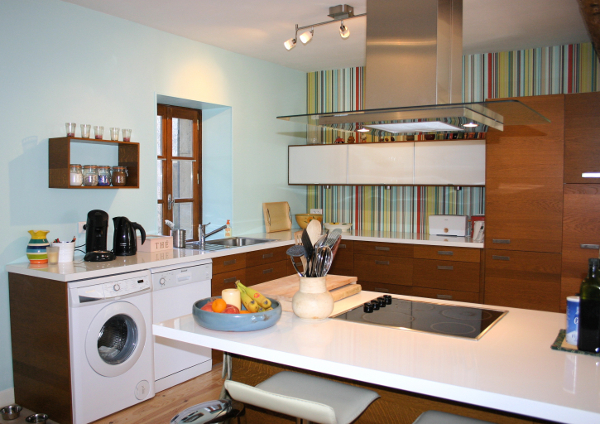 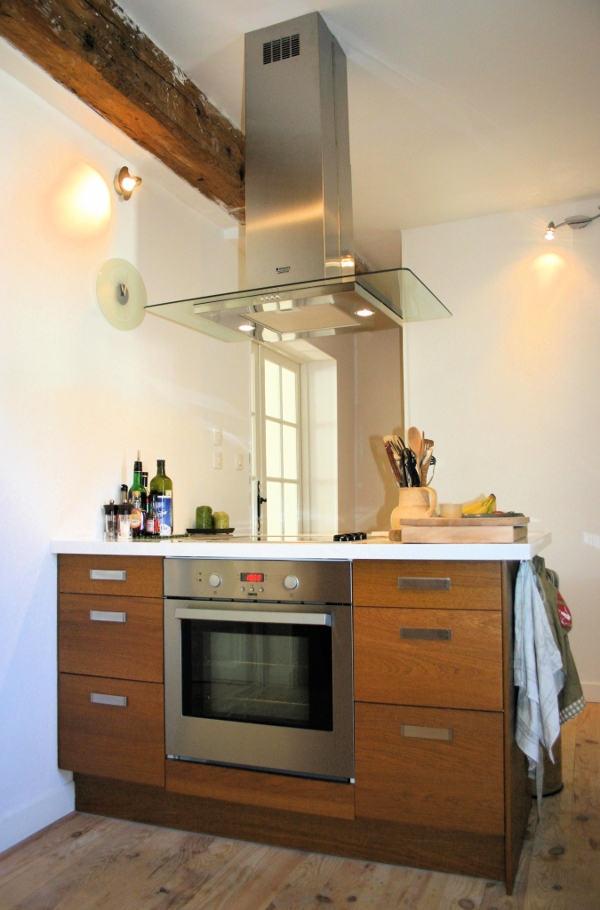 Again, we set about designing our dream kitchen and calling on the talents of local contractors to bash down an unhelpful stud wall that made a useless corridor on one side of the kitchen, get rid of the ages old chimney hood and install the new kitchen. As our budget was tighter, and because the house had been sold with all the kitchen appliances, this time the kitchen design featured fewer integrated appliances (just the fridge-freezer), but much more storage – and the fabulous kitchen island/ breakfast bar was a great addition too.

My favorite bit is the wallpaper though – I had seen a similar effect using strips of different colored and different sized tiles; but trying to recreate that was too much for our budget. So this Barcode wallpaper by Harlequin in the aqua, burgundy, apple and beige colorway proved an ideal alternative. It worked really well with our existing collection of décor objects; we loved it so much that we carried it through into the living room next door. I’m also very proud of the little box shelf above the washing machine that we made ourselves from a defective cabinet door! Our DIY skills have certainly improved since the London days! 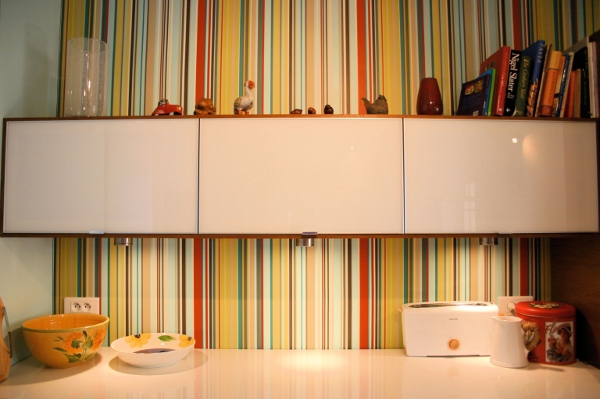 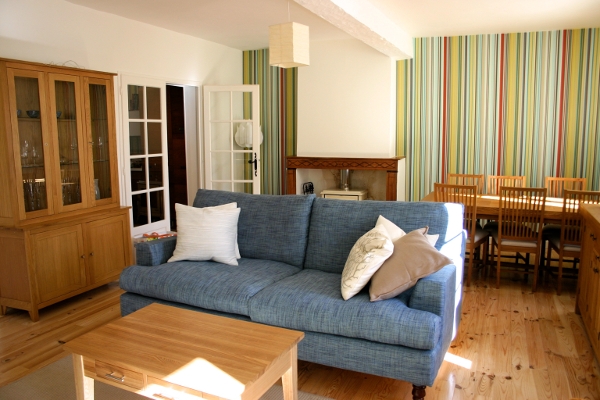 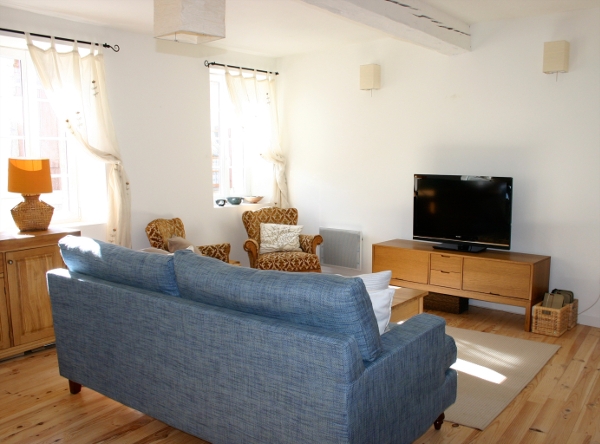 Upstairs in the main house, the huge landing provided a great space to display a beautiful oriental screen Jamie had inherited from his mother and created a natural spot for a reading nook. The two bedrooms only required little personal touches, in the form of more lovely wallpaper this time from Villa Nova (the Greta design in Raspberry, from the archived Florence collection); in the second bedroom we’d sourced these simple beds from the French version of Craigslist, and made the headboards using the wonderful Maury design from the French Catalan fabric brand Toiles du Soleil. 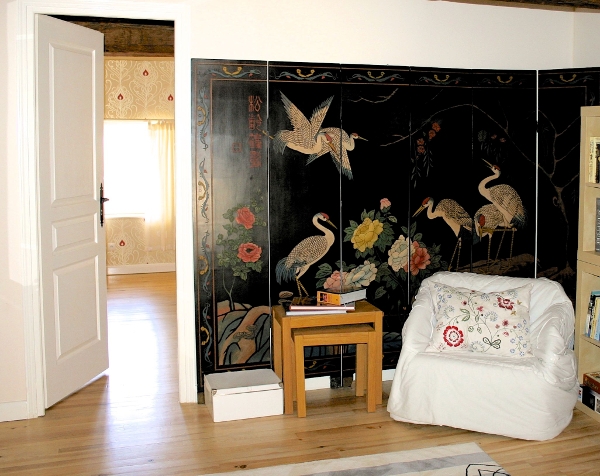 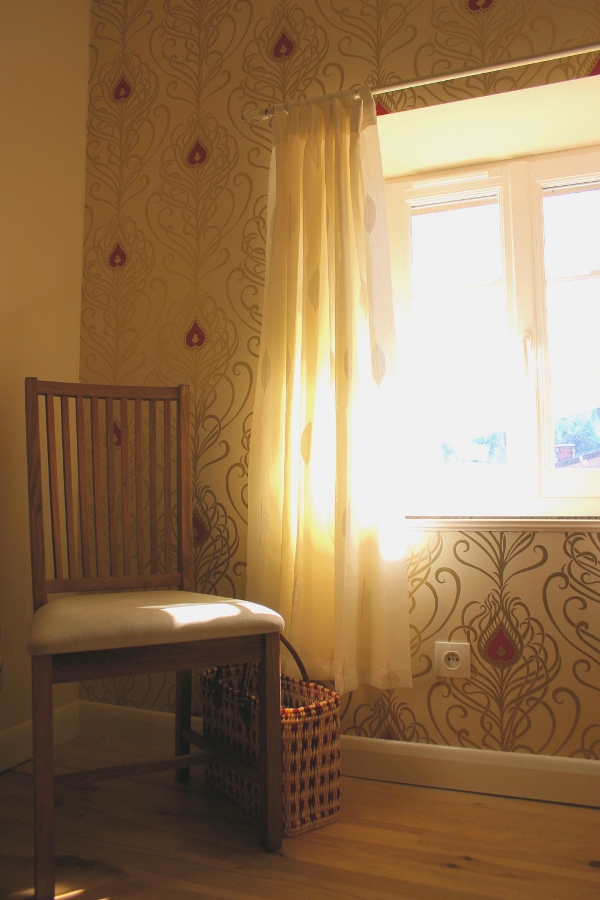 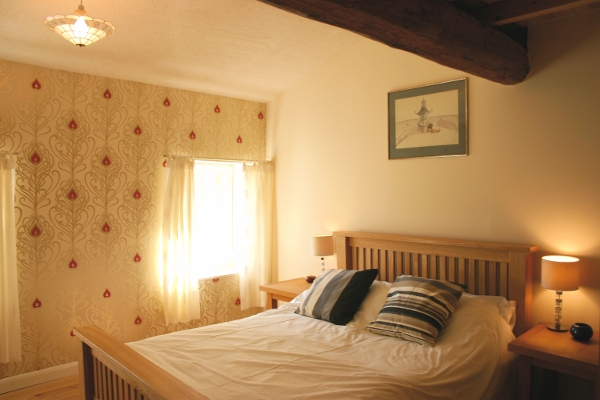 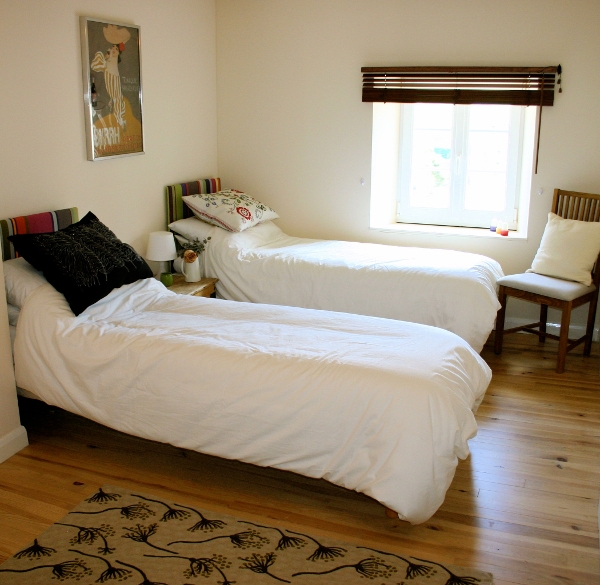 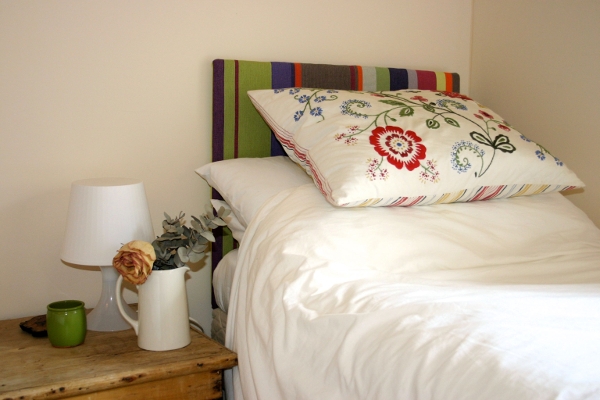 The main house was now finished so we were ready to tackle the converted barn at back. As the ground floor of the barn had its own entrance from the street, the idea was to remodel the two “bedrooms” into as a separate one-bedroom cottage that we could either rent out or offer to guests. We got straight to work with our kitchen contractors, transforming the empty ground-floor room into an open-plan kitchen/ living/ dining room. We recycled the kitchen cabinets from the old main house kitchen and got some budget-friendly appliances from IKEA! 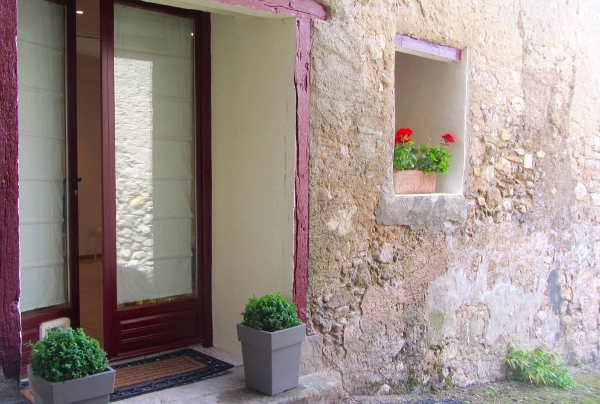 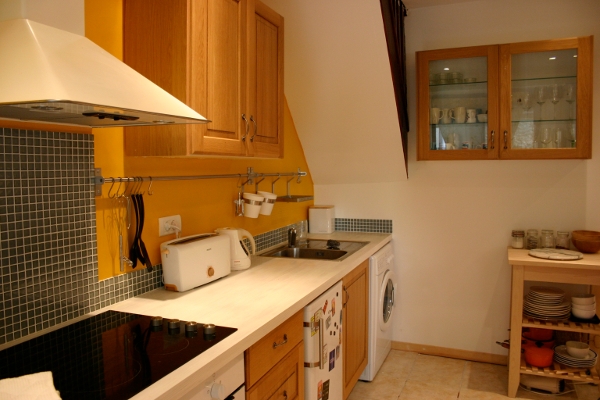 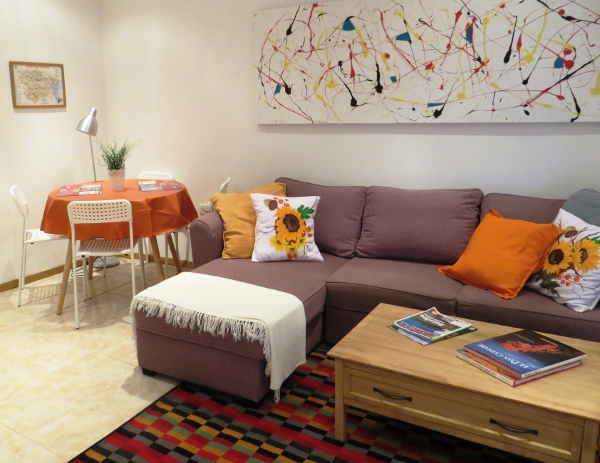 By the way, how do you like my homage to Jackson Pollock hanging over the sofa! (It’s the same canvas from the London house master bedroom, which never did get finished – I just painted over it with white wall paint and started over!)

The first-floor bedroom and en suite bathroom only needed repainting and dressing; we blocked over the door that linked this room to the main house, leaving the steps up to the door as a quirky feature bookshelf. 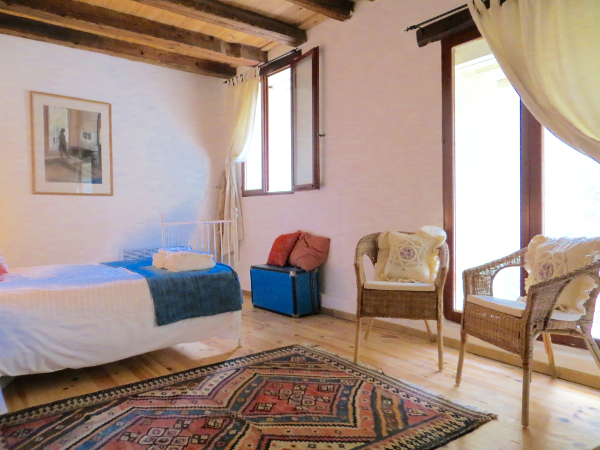 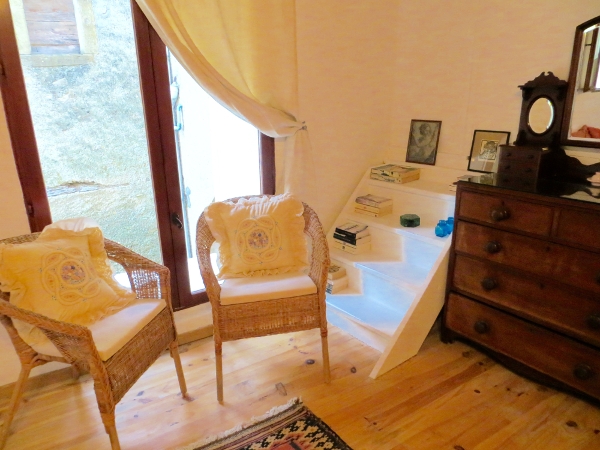 But, horror of horrors! Remember that lovely roof terrace I mentioned? Just as we’d done repainting the cottage bedroom, the roof terrace started leaking – BIG TIME – right into that bedroom!

It turned out that the previous owners had done a truly terrible job when converting the top floor of the barn into a roof terrace, and they had not added sufficient (or in fact ANY) waterproofing! Unbelievable! They had literally covered the wooden barn floor with MDF and then tiled over that with cheap exterior tiles that cracked as the construction swelled and contracted when temperatures changed.

Luckily, by now we had quite a few great contacts in the local construction industry and were able to find a trustworthy roofing contractor with a track record of roof terrace installation who would also give us a guarantee. He also advised us to seal the exposed walls with stucco, and another contractor did that for us using this fabulous yellow ochre tint that just looks the bomb! In fact the whole terrace, now covered in a silicon membrane and teak decking looks incredible! 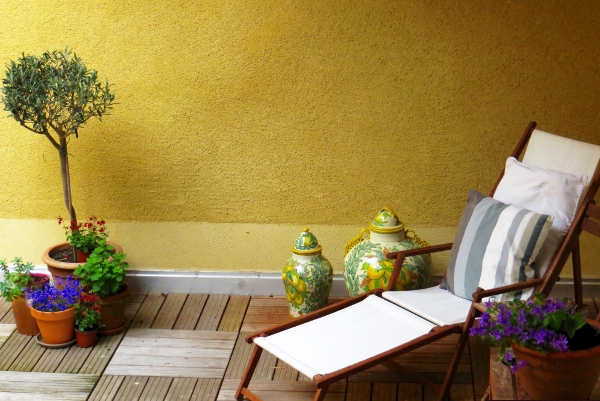 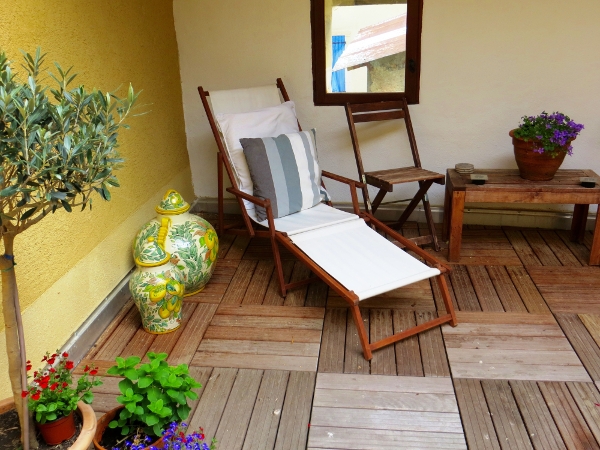 So a few months and several thousand bucks later, we were finally ready to repaint the bedroom and open the cottage to our first paying guests!