When Mary and her husband relocated from the “mitten” of Michigan to Durham North Carolina, they found their dream house in the form of an older (1939 to be exact) fixer-upper that had sat unoccupied for ten years prior to their purchase.

The house had a great deal of promise, and fortunately Mary and her husband, in spite of being in their 20s had plenty of prior DIY/remodeling experience, having renovated their previous home in Michigan extensively.

The fact that their new home in the south had been empty so long and exhibited all the eccentricities that older homes do was not in the last daunting to the pair.

Their site www.lemongroveblog.com details their experiences of home renovation in both locations thoroughly and entertainingly. 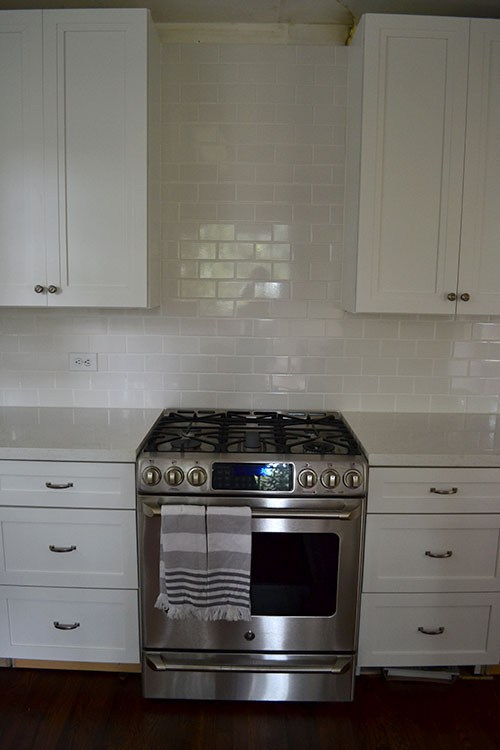 Mary and her husband had already done an extensive makeover of the kitchen in their new home, expanding cabinetry, updating appliances, painting, adding a peninsula for dishwasher and sink.

The renovation had actually been done for several months, with just some of the detail left to finish. As can happen with extensive home renovations, other areas of the house had demanded fuller attention, and the good intentions to finish up the remaining projects, such as addition of crown molding, often got pushed aside.

There were some corrective bits that required the experts at Home Depot to come and finish as well, the delay in their being able to come had factored into the further delay of the finishing touches to the kitchen.

Just prior to the much anticipated big box visit, Mary and spouse decided to address the last touches required to their cabinetry in the kitchen. The weekend before they set about installing their own crown molding on top of the cabinets.

Mary LOVES crown molding and had previously replaced tons of it in other room of both of their homes, the old one and the new one. She particularly likes deep/tall crowns for the finished look they give not only walls, but also as it turns out, the cabinetry in the kitchens of both domiciles. 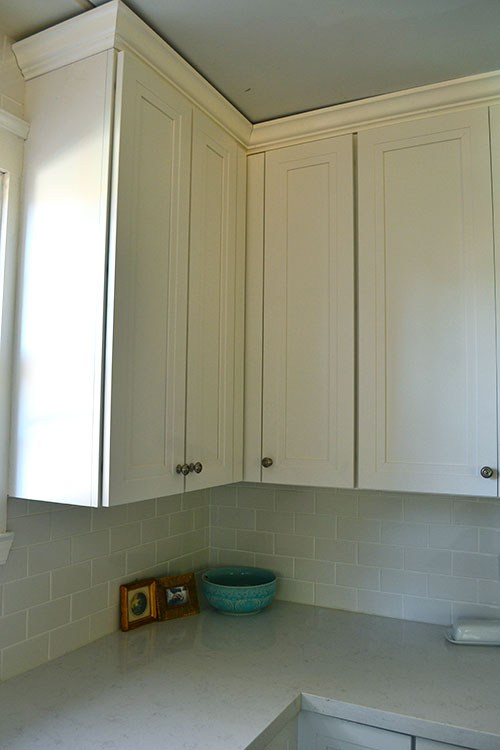 Because their North Carolina house was several decades old with all that time to settle and sag, Mary and hubby quickly found that their original intention for crown molding in the kitchen had to be adapted, exchanged for a different method due to the ceilings not being quite square and even.  Undaunted, they adapted to the challenge.

Even though Mary loves a big crown molding, pleas from her husband Jay were listened to and they had already determined to use an option with a shorter rise. Additionally, due to having ordered plenty of molding (as is recommended by the experts) that was used in other rooms in the house, they had plenty of extra, already purchased and ready to be installed already on hand.

They discovered a few minor things that had previously slipped their attention when the major kitchen remodel had been performed, like the cabinet relocation that had opened up a space and which had not been finished clear to the ceiling with the subway tile wall treatment they had previously installed. That was a quick fix in addition to the completion of the crown molding.

Be sure to check out their site, not only for this post, but for all the great information contained there. They offer pictorial tours of both of the houses they renovated, you will marvel at the before and after pictures and quite probably be inspired by this energetic young couple! 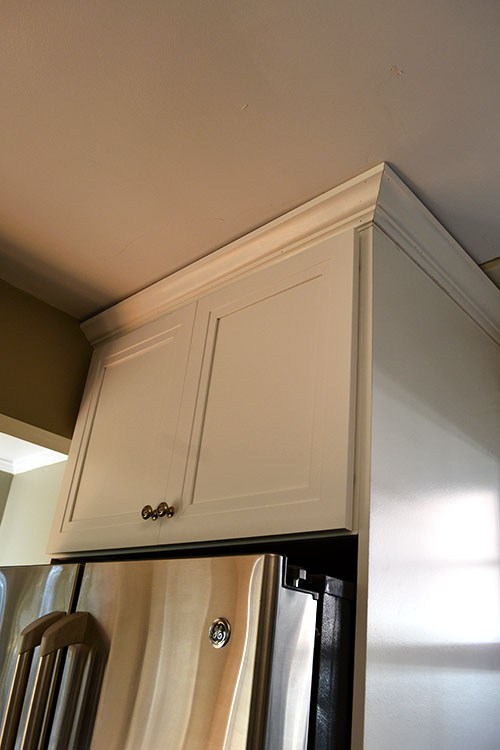