Stamped concrete is a relatively inexpensive option for sidewalks, walkways, driveways and doorsteps than traditional stone, slate or brick flags. First introduced in the 1970s, the technology has developed in recent years for the treatment to more accurately mimic natural materials and bricks, and the cost, roughly $10 per square foot, can now be reduced further, to approximately $3-$4 per square foot as a result of a new unique tile system.

Newly available on the market is a treatment that is responsible for the recent price reduction and the resident DIY maven at diyfunideas.com, Jenise, has provided the perfect tutorial for the process. 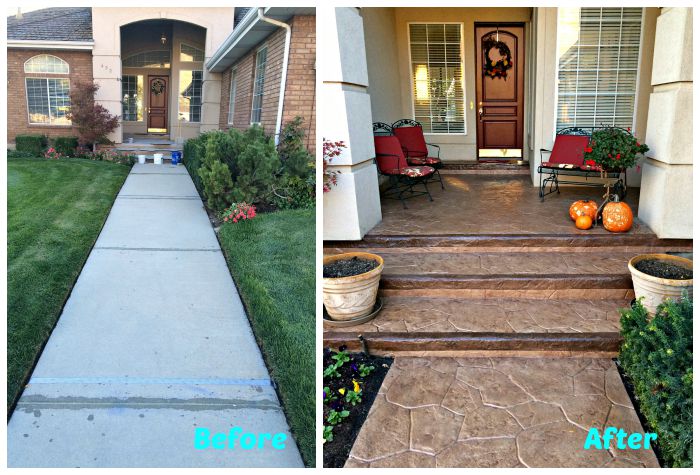 When concrete stamping was first introduced, the decorative effect was produced by first pouring the concrete in place in a driveway or other location, then applying a framework of stamp forms into the still wet concrete to produce the textured effect. The technique that Jenise showcases relies instead on tiles, pre-poured and cured, which can then be placed in position by the use of concrete adhesive, after which the traditional finishing treatments of so called “base color” and accent color can be applied. The finished effect is every bit as convincing as stone, slate or brick as its predecessor, and is an attractive and even more affordable alternative.

The patterns are chosen in advance and are available in a couple of options, one that mimics irregular stone shapes and another that produces a geometric pattern. Jenise chose the faux stone look and a mold that would cover 5 sq. ft. of surface. When purchased, the system arrives as a complete kit with the reusable molds, a proprietary tile mix, adhesive mix, primer, color powder, and sealer. No experience at pouring and installing concrete is required, only average DIY experience and a can-do mindset. 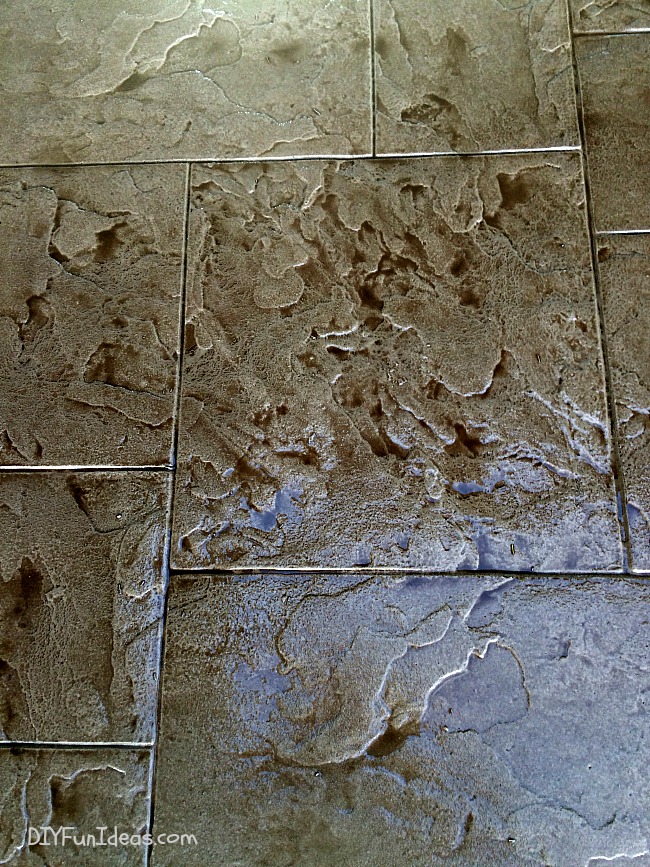 Jenise called on a friend, who poured her tiles in advance and came up with an ingenious drying system that allowed multiple concrete tiles to dry vertically, thereby taking up less space. Once the tiles had set and cured, he delivered them to her parent’s house and the installation got underway.

The first step in the installation was a thorough cleaning of the surface on which the tiles would be set.  Jenise employed Simple Green cleaner in a 3:1 ratio with water, and used a shop broom to scrub the surface, then rinsed the existing poured concrete driveway with a pressure washer rented from Home Depot. Obstructions and any remaining debris had to be removed before the next phase of the project. If not already done, the border between lawn and driveway should be edged at this time and any waste removed.

The next step is to prepare the existing surface with primer.  The primer is mixed with sand and applied to cracks, joints and depressions. Cracks and joints are filled with the primer via use of a putty knife.  Once this step is finished, the surface should then be completely covered with primer; Jenise used a long handled paint roller to apply it.

A layer of sand is broadcast over the primer while wet; as the primer and sand dry, Jenise and her friends mixed up the concrete adhesive. Using a trowel, the prepared adhesive is then applied to the individual tiles.

For the remaining steps in the process, including the addition of base and accent colors, step  by step instructions, tips for success, bountiful in-process pictures and a video of the project, check out Jenise’s post at: 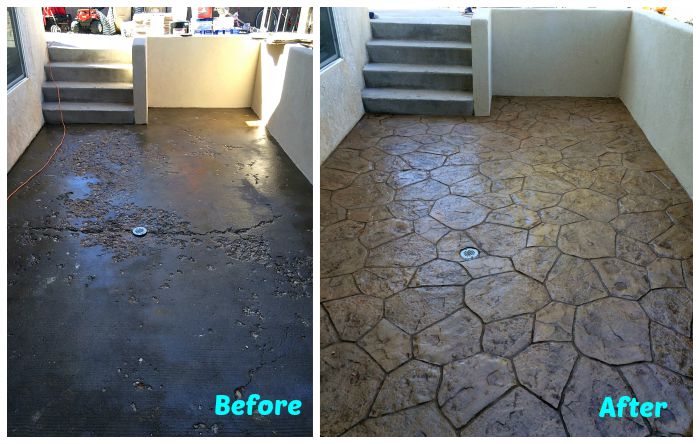 REVIEWED AND FACT-CHECKED BY JAMIE SANDFORD 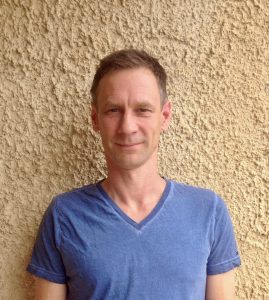 Jamie Sandford is the Chief Editor at RenoCompare (find out more). Jamie has been involved in construction for over 30 years. Straight out of college, Jamie worked with construction crews for the television, film and theatre industries for over 12 years. In his thirties, he turned his attention to DIY decorating and construction, working on many house renovations and remodels. During this time he started to specialize in home flooring and in 2013 he launched the Home Flooring Pros website. Two years later he launched RenoCompare.

“I’ve seen interior design, remodeling, and construction from both sides of the street, contractors on one side and homeowners on the other. My aim is to close the gap between the professionals and the consumers and make it easier for both sides to work smoothly and effectively side by side. At RenoCompare we want to save you time and money by giving you the information you need as simply and as quickly as possible!”